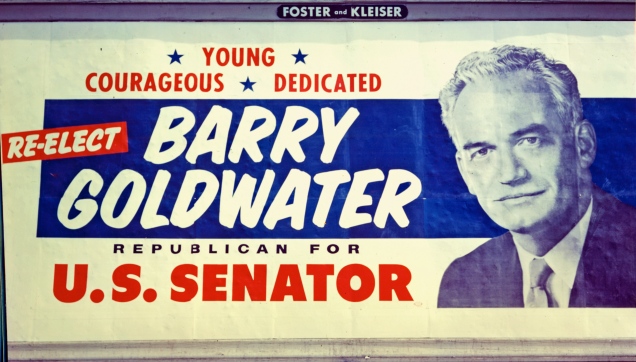 To understand why the Republican Party are on course to lose their third consecutive presidential election, one must look much further back in time than the rise of Donald Trump

It gives no satisfaction to watch any storied political party hurl itself into oblivion – even the US Republican Party, which has frequently infuriated true conservatives with its sanctimonious and hypocritical habit of screeching about the dangers of encroaching socialism under Democratic administrations while themselves consistently cranking up the size and role of the state at every opportunity.

But while it now seems almost certain that the Republicans have thrown away any chance of reclaiming the White House, imploding in a foul-mouthed torrent of bluster and recrimination more worthy of Jerry Springer than a presidential primary campaign, it is worth looking back and asking how the GOP finds itself in this position, and exactly when the seeds of destruction were sown.

I have been reading widely on this, focusing less on the crowing and virtue-signalling Left, and far more on those thoughtful and introspective voices on the Right who are often appalled by the rise of Donald Trump in particular, but often sympathetic to the anti-establishment fervour which fuels his candidacy.

And if I have to pick just one excerpt from one piece to explain the predicament in which the Republican Party currently finds itself, I would encourage my readers to read “I was wrong about Donald Trump” by Daniel McCarthy over at The American Conservative.

In his piece, McCarthy concludes:

Trump succeeds because of more than outsize personality, of course. He attracts some support from everyone who thinks that Conservatism, Inc. and the GOP establishment are self-serving frauds—everyone who feels betrayed by the party and its ideological publicists. Working-class whites know that the Republican Party isn’t their party. Christian conservatives who in the past have supported Mike Huckabee and Ben Carson also know that the GOP won’t deliver for them. Moderates have been steadily alienated from the GOP by movement conservatives, yet hard-right immigration opponents feel marginalized by the party as well. Paleoconservatives and antiwar conservatives have been excommunicated on more than one occasion by the same establishment that’s now losing control to Trump. They can only applaud what Trump’s doing, even if Trump himself is no Pat Buchanan or Ron Paul.

Conservative Republicans™ somehow maneuvered themselves into a position of being too hardline for moderates and non-ideologues, but not hardline or ideological enough for the right. Trump, on the other hand, appeals both to the hard right and to voters whose economic interests would, in decades past, have classed them as moderates of the center-left—lunch-pail voters.

What’s even more remarkable is that movement conservatives, who have been given plenty of warning, ever since 2006, that their formula is exhausted, keep doing the same thing over and over again: they’ll dodge right, in a way that right-wingers find unsatisfactory but that moderates find appalling; then they’ll weave back to the center, in a way that doesn’t fool centrists and only angers the right. Immigration—which was another of George W. Bush’s stumbling blocks, lest we forget—has been the issue that symbolized movement-conservative Republicanism’s futility most poignantly. It’s not even clear that most GOP voters agree with Trump’s rhetorical hard-line on immigration—they just like it better than the two-faced talk of the average Republican politician.

Trump has a plethora of weaknesses, as general election polls amply demonstrate. But just look what he’s up against within the Republican Party: that’s why he’s winning.

I have yet to see the rise of Donald Trump explained as thoughtfully and succinctly as it is in the first three paragraphs quoted above. Sure, McCarthy’s piece does not tackle every aspect of the situation – whole books can and will be written about the causal factors of this huge anti-establishment backlash, which is far bigger than any one political party – but it does explain why the current GOP was so badly positioned to withstand a populist insurgency like Trump’s.

Much like the British Labour Party has become a fractious and increasingly unworkable coalition of idealistic left-wingers, pragmatic centrists and (let’s be frank) soulless political shapeshifters, and much as the historic splits in the Conservative Party are re-emerging following a vacillating 2016 Budget and the party leadership’s betrayal of the activist base on the coming EU referendum, so the Republican Party’s big tent of Reaganites, neo-cons, Evangelicals and social conservatives is collapsing – for those reasons outlined above by McCarthy.

Read the collected output of Rod Dreher too, and this piece by David Brooks, which looks to the future which could yet follow 2016’s rock bottom:

Trump is prompting what Thomas Kuhn, in his theory of scientific revolutions, called a model crisis.

According to Kuhn, intellectual progress is not steady and gradual. It’s marked by sudden paradigm shifts. There’s a period of normal science when everybody embraces a paradigm that seems to be working. Then there’s a period of model drift: As years go by, anomalies accumulate and the model begins to seem creaky and flawed.

Then there’s a model crisis, when the whole thing collapses. Attempts to patch up the model fail. Everybody is in anguish, but nobody knows what to do.

That’s where the Republican Party is right now. Everybody talks about being so depressed about Trump. But Republicans are passive and psychologically defeated. That’s because their conscious and unconscious mental frameworks have just stopped working. Trump has a monopoly on audacity, while everyone else is immobile.

[..] At that point the G.O.P. will enter what Kuhn called the revolution phase. During these moments you get a proliferation of competing approaches, a willingness to try anything. People ask different questions, speak a different language, congregate around a new paradigm that is incommensurate with the last.

As Brooks says (perhaps a little naively), this is not necessarily all bad news for conservatives. If we are honest, we have to admit that conservative policies in America and Britain are no longer perfectly calibrated to the challenges of the day as they were in Thatcher and Reagan’s time.

That is not to say that the Left are any better; Lord knows they aren’t. But it does mean we should acknowledge certain facts – like the fact that we still have a stubbornly large permanent underclass, and that for all the irreplaceable benefits of globalisation, there are still those who miss out – and seize the initiative by proposing radical conservative policy solutions to the great challenges of the new century.

In Britain, David Cameron’s Coke Zero Conservative government – or the Ted Heath tribute act, as this blog has taken to calling them – seem to think that One Nation Conservatism means stealing as many of Labour’s left-wing ideas as possible. And in America, Donald Trump’s brand of populist pseudo-conservatism doesn’t believe in One Nation at all, unapologetically carving the country up into winners and losers.

Neither is the correct approach. And as Cameronism and Trumpism run their respective courses, this blog will continue providing commentary and offering suggestions for an alternative conservatism, in Britain and America.

Postscript: This blog has decreased its focus on US politics in the past few years, primarily because I have been London based and fully occupied writing about British political issues. But Semi-Partisan Politics will begin to cover the American presidential election with a little more frequency going forward, partly because I have always remained a close follower of American politics – often more so than the household name journalists dispatched to the States by their newspapers and now portentously reporting back to us as self styled “experts”.

Having lived in America helps – particularly having lived in the American Midwest, not just the coastal enclaves of New York and Washington, D.C. familiar to most British journalists who write about America during election season. And the fact that I am married to a Hillary Clinton-supporting Hispanic Texan helps too. When I write about American politics, I know whereof I speak.

But I am also covering the presidential race because as a conservatarian with one foot firmly planted on either side of the Atlantic (and a heart divided equally between Britain and America), I believe that in my own small way I can bring a perspective to the left/right, authoritarian/libertarian debate that is often missed by those whose thinking and writing is rooted firmly in just one country’s specific conservative tradition.

To borrow an overwrought phrase from the dystopian world of Identity Politics, consider this my contribution to an “intersectional” perspective on conservatism.

They’ll absolutely hate me for that.