If any further proof were needed that conservatives and socialists think differently and see the world in a completely different way, you need only look at the latest feature in the Guardian’s nauseating, saccharine “This Is The NHS” series, a self-flagellating little feature asking “How much have I cost the NHS?”

In this post, the Guardian takes a break from exploiting real-life stories from doctors and patients to emotionally manipulate people into blindly supporting Britain’s unique but unexceptional healthcare system, and instead invites you to plug your personal details into their online calculator so that you can find out exactly how much money Our Blessed NHS lavishes on you every year. You ungrateful wretch.

Public spending on health services reached £2,069 per person in the UK in 2014-15, but it does not benefit everyone to the same extent. Your annual cost to the NHS depends on your gender, age, and how frequently you use the health services, according to estimates from the Nuffield Trust.

So the total cost of your healthcare increases as you consume more healthcare services. Riveting stuff. Great investigative journalism.

The calculator does throw up some interesting numbers. Interestingly, if you sit stubbornly at home and never use a single NHS service or treatment of any kind, you somehow still manage to cost the health service hundreds of pounds a year.

Meanwhile, at the other end of the spectrum, if you were really unfortunate and had every possible thing go wrong with you (once) in a given year, the NHS could be on the hook for as much as £180,410 – though I suspect that the calculator is holding back here, and that some patients may comfortably exceed this total without having to check every single box: 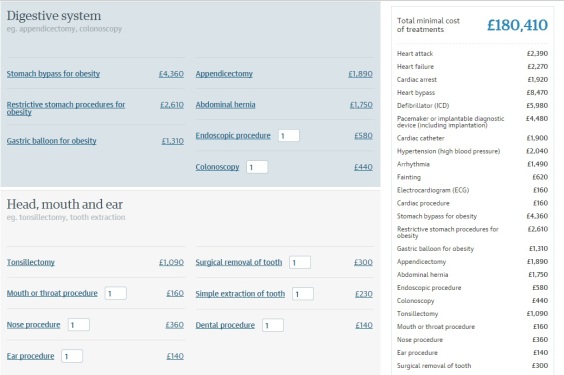 Also interesting is the fact that the only mention of mental health and associated problems from addiction to depression is buried deep in the “Other” section, and not given the prominence that a right-on publication like the Guardian might be expected to lavish. One can only speculate as to the reason for this sudden downplaying of mental health issues.

But the really interesting and revealing fact is that the Guardian published the article at all – and the conspicuous lack of a counterpoint piece asking how much we each contribute to the NHS (or indeed any of our other public services) every year through our taxes. Why the obsession with how much we are individually costing the state (or harming the environment with our carbon dioxide emissions, or doing any other Bad Thing) when there is no equal curiosity about how much we contribute? Looking at one side of the equation is meaningless until you also have visibility of the other.

This deliberate omission is especially galling at a time when some citizen-focused governments are now providing individual taxpayers with an itemised receipt every year, showing how much of their taxes have been spent on different areas of the budget like education, healthcare and defence. George Osborne even brought the practice to Britain, to the inevitable howls of protest (and accusations of disseminating propaganda) from the Left.

It may seem trivial, but this is a fundamental difference in mindset. Issuing a receipt showing how and where government is spending your money is an act of transparency and an acknowledgement that the government derives its legitimacy from – and can only function with the consent of – the citizenry.

Publishing a sanctimonious little online calculator so that your left-wing readership can calculate how much they cost society with every breath, on the other hand, elevates the state above all. It presupposes that we exist only at the pleasure of the government, that the state has a rightful claim on all of our possessions as well as the product of our labour, and that we should be grateful for any trivial sum that we are allowed to keep for ourselves after we have funded the Public Services behemoth.

Doing things the Guardian’s way – focusing on how much taxpayers “cost” their own government – inverts the proper power relationship between citizen and government, which should rightly be one of the state existing to serve and protect the people, not the other way around.

But of course we all know exactly why the Guardian is so eager to talk about how much we cost the state (and chide us for doing so) yet desperate to avoid talking about how much we contribute. Because to look at both sides of the equation simultaneously would be to encourage the public to ask whether they getting value for money. And it would reveal – as we now know – that the majority of us are net takers, or beneficiaries, from the system.

The Guardian’s whole anti-Tory, anti-austerity schtick is built entirely on the notion that we all contributed to our public services, and that the dastardly Evil Tories are cutting services to which we have all made substantial financial contributions. They seek to perpetuate the vague notion that we have a contributory welfare system, when in reality Britain’s welfare system is defiantly, depressingly non-contributory.

Some of us contribute vastly more to the exchequer than we will ever receive back in public services. Some of us struggle to break even. And others are on “take” mode for pretty much their entire lives – often for very justifiable reasons, but other times much less so. Most of us will fall into different categories at different stages of our lives.

But the Guardian doesn’t want people to know or think about any of this, or have access to this information. The prosperous middle-class couple on a joint six-figure income, blessed with good health and the lifestyle habits to maintain it, may well balk when they realise how much they are contributing to the NHS compared to what they receive back in a given year, or the equivalent projected lifetime figures. And they may balk again when they realise that their chain-smoking neighbour who trundles off to the doctor at the first sign of a cold contributes far less.

In short, real transparency about contributions made and benefits received would encourage a more consumer-like mindset among the people, forcing them to take responsibility and make the decisions which are best for them and for their families. And this goes against everything that the Guardian believes, because they want us to be a nation of state-dependent drones, flopping around helplessly, utterly reliant on services and/or alms disbursed by the government.

So, to recap: Itemised bills from the government for services provided to you by the state? Wonderful, brilliant idea, and a great way to remind us of everything that the beneficent nanny state does on our behalf.

Itemised receipts from the government showing the breakdown of how your tax payments are being spent? Evil propaganda designed to mislead the people and whip the lemmings up into a hysterical rage.

Glad we cleared that up. 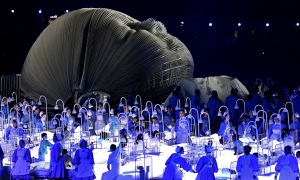 2 thoughts on “National Religion Daily Penance: How Much Do YOU Cost Our NHS?”