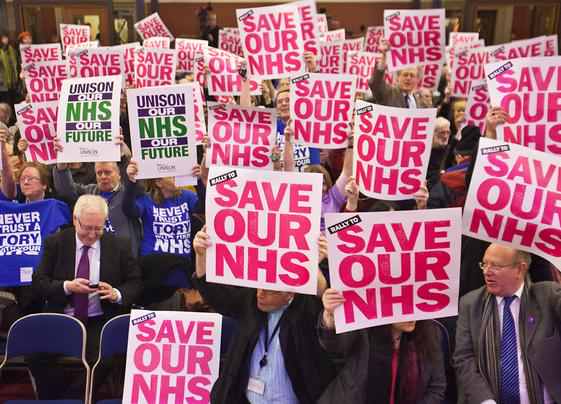 British healthcare reform should be the subject of forensic journalistic analysis and urgent debate, but all we have are saccharine, uncritical devotionals to the NHS

If you were the CEO of a company whose costs were relentlessly increasing and competitors gaining ground with every passing quarter, what would you do?

Would you waste valuable time looking back wistfully on the glory days, when every product launch was an unparalleled success and new customers were queueing around the block? Or would you take a hard-headed, dispassionate look at what was necessary – redundancies, divestments, acquisitions, innovations – to reshape and refocus the firm to prosper in the new, harsher environment?

Any executive worth their salt would do the latter. Corporate graveyards are littered with the bones of executives and companies who chose to dwell on a romanticised, sentimental vision of the past rather than face the difficult future.

Sadly, when it comes to the NHS we adopt the former, toxic mindset. Rather than thinking dispassionately about how best to deliver healthcare to an advanced nation of 65 million ageing, fattening citizens, we prefer to think of the glory days of socialised healthcare while utterly neglecting the future. We prefer to smugly bask in what we consider the wisdom and compassion of the post-war generation who created the NHS rather than ask ourselves whether what worked in 1948 will still work seventy years later in 2018, let alone by its centenary in 2048.

There is more than enough blame to go around for this depressing state of affairs. The NHS-Industrial Complex, that vast and interconnected web of (sometimes but not always well-meaning) special interests is certainly at fault. So too are glib and cowardly politicians, who would rather fire up a crowd (and win re-election) by making empty promises to Save Our NHS rather than grapple with the difficult (and politically toxic) detail. And we ourselves are to blame, for continually rewarding this short-termist and opportunistic behaviour in others.

But today’s entry in the Healthcare Hall of Shame is the Guardian newspaper, whose natural left-wing political leanings have prompted one of the worst cases of journalistic NHS hagiography in recent years. This time the Guardian have outdone themselves with their new ongoing series, This Is The NHS.

Visit the This Is The NHS mini-site and you will be confronted with three main types of story:

Some of these stories are very moving, dealing as they do with illness, loss or periods of great hardship and vulnerability in the lives of their subjects. But none of them come close to explaining why taxpayer-funded, government-provided healthcare is the best possible solution for Britain. Both of these maxims – taxpayer funded, government provided – may still be optimal. Maybe. But is it not worth doing any kind of comparative analysis to be sure?

And when the physical expression of our healthcare policy is one of the five largest human bureaucracies in the history of the world, is it really not worth checking that we are on the right track, that a government-run National Health Service still makes sense?

Apparently not. Emotion and stubborn attachment triumph over reason, and we are supposed to suspend our critical faculties and clap along to each positive story about the NHS without questioning what treatment (if any) in each scenario is unique to the NHS and would not have been given to an equivalent patient in, say, Canada or France.

I take this extremely personally. Like most people, I have had occasion to use various NHS services throughout my life, sometimes – such as when I came down with appendicitis – at times of physical pain and imminent danger to my wellbeing. Naturally I was very grateful for the excellent, professional service that I received.

But I deeply resent my natural feelings of gratitude – and those of countless other people, many of them featured in the Guardian’s This Is the NHS series – being taken and deliberately twisted into a cynical piece of emotionally manipulative propaganda by journalists and special interests with a strong (and shamefully undeclared) desire to maintain one very specific model of healthcare funding and provision. That is simply not right.

The Guardian would hate this analogy, but with their navel-gazing, introspective examination of the status quo when it comes to British healthcare, they are exhibiting the same lazy superiority complex shown by US conservatives when ObamaCare was being debated. Like American conservatives, the Guardian (and nearly the entire British Left) stubbornly believe that their respective systems are the envy of the world, and insist on saying so loudly and repeatedly while failing to provide any proof whatsoever to back up their assertions.

As the ObamaCare debate raged in America, countless Republican politicians and Tea Party activists could be found ranting about President Obama’s evil socialist plan to destroy the “greatest healthcare system in the world”. And today, as David Cameron’s Conservative government rearranges the deckchairs in an attempt to look purposeful when it comes to healthcare, foaming-at-the-mouth left-wing activists shriek to anyone who will listen about the Evil Tories and their dastardly plan to sell off the NHS to their rich friends while leaving the sick and elderly to die on the streets.

Of course, both claims are ridiculous hyperbole. The Affordable Care Act (ObamaCare) was a relatively timid, incremental and (thus far) underwhelming attempt to expand the existing system of private healthcare coverage to more Americans. And whatever privatisation schemes the Tories may have cooked up to date are a drop in the ocean in terms of the total volume of services delivered by the NHS, and do nothing to change the twin fundamentals of taxpayer-funded care, free at the point of use.

So given the fact that nothing remotely shocking or remarkable is currently happening in terms of British healthcare policy, why publish the This Is The NHS series in the first place? The Guardian portentously explains:

Our aspiration is to examine a broad range of issues, from the strains on A&E to standards of care for the elderly, the multi-layered issues surrounding mental health, chronic disease, the high cost of drugs and the impact of alcohol. And exciting treatments using new sciences and cutting-edge technology. We want to understand the dilemmas over prioritisation, over-prescribing and the cost of drugs. And the fiendishly complicated way the service is managed and run. We want to address the question: do we have the NHS we need? The aim is to do this through diaries, fly-on-the-wall reporting, interviews, films and explanation.

We have asked a large sample of our readers what they want from this project. The most engaging focus, ahead of anything else was … hope. “I’d like to see both sides of the story, as all we hear about is the failings or pay issues,” one reader said. “What about those patients who have been cared for amazingly, staff who are brilliant at their job and enjoy it?” Another urged that amid all the perceived problems: “The successes of the NHS need to be celebrated.”

In other words, the Guardian is seeking to satisfy the desire of its left-wing readership to hear stories confirming how wonderful the NHS is. Sure, there will be a few token negative experiences thrown in to give the appearance of objectivity (though anecdotally, I have noticed far more positive than negative stories thus far). But there will under no circumstances be any challenge to the fundamental assumption that the NHS model is Good and Virtuous, and not to be questioned under any circumstances.

Imagine if the Guardian set out to create a similar month-long deep-dive series examining the workings of the Ministry of Defence and Britain’s armed forces. The Guardian’s journalists and commentators would have a field day forensically examining and questioning every element of spending, every organisational aspect and every core function. They would see it as their journalistic duty to take a root-and-branch view of the whole organisation, to muse about the very meaning of defence and national security in the modern age, and question whether the existing deeply historical structures are equal to our current and future challenges. And they would actually be right to do so, even though they and this blog would come to very different conclusions.

But when it comes to the NHS, nothing and nobody is allowed to challenge the dusty 1940s dogmas upon which the British healthcare system is built. Everything is up for debate – so long as the answer involves pumping more money into the same, fundamentally unreformed system.

This is stubborn childishness in the extreme. An infantilised British public (particularly the metropolitan left-wing segment who comprise the Guardian’s readership) demand stories which make us feel better about Our Beloved NHS, and which reassure us that the NHS is doing lots of great things despite the endless succession of negative headlines. And the Guardian responds with a spectacularly uncritical, depressingly uncurious series of devotionals to the decaying status quo.

I’ve said it many times before, but it still bears repeating: our blind, unquestioning devotion to the NHS is quite literally killing us. And thus far, the Guardian’s “This Is the NHS” series – which could have been the catalyst for a serious discussion – is just another smug monument to our national sickness/religion.