Donald Trump’s derisive comments about London and his proposal to ban all Muslims from entering the United States are idiotic and hugely illiberal. But the self-righteous backlash from parts of the Left is just as bad

Mitt Romney found that out the hard way back in 2012, after his off-the-cuff comments about the London Olympic Games preparations earned the ire of the British public and a personal rebuke from David Cameron.

But current Republican presidential candidate (and, depressingly, frontrunner) Donald Trump managed to make Mitt Romney’s gaffe-prone diplomacy look like a veritable charm offensive with a two-pronged effort to capture the news cycle which saw Trump first suggest that the US implement a complete ban on Muslims entering the country, and then insult America’s closest ally by suggesting that whole swathes of London are so full of Islamist extremists that the police do not enter them for fear of their lives.

From the New York Times:

Donald J. Trump called on Monday for the United States to bar all Muslims from entering the country until the nation’s leaders can “figure out what is going on” after the terrorist attacks in San Bernardino, Calif., an extraordinary escalation of rhetoric aimed at voters’ fears about members of the Islamic faith.

A prohibition of Muslims – an unprecedented proposal by a leading American presidential candidate, and an idea more typically associated with hate groups – reflects a progression of mistrust that is rooted in ideology as much as politics.

Mr. Trump, who in September declared “I love the Muslims,” turned sharply against them after the Paris terrorist attacks, calling for a database to track Muslims in America and repeating discredited rumors that thousands of Muslims celebrated in New Jersey on 9/11. His poll numbers rose largely as a result, until a setback in Iowa on Monday morning. Hours later Mr. Trump called for the ban, fitting his pattern of making stunning comments when his lead in the Republican presidential field appears in jeopardy.

In a bid to justify his controversial comments that Muslims should be barred from entering the US, Trump had said parts of London and Paris were so “radicalised” – seemingly a reference to Islamist extremism being rife – that police officers were scared.

He added: “We have places in London and other places that are so radicalised that the police are afraid for their own lives. We have to be very smart and very vigilant.”

It really isn’t necessary to counter either Donald Trump’s back-of-a-napkin immigration policy, his supremely un-American idea for a religious test in order to enter the United States or his uninformed comments about the city which some years ago overtook New York and Paris as the world capital for finance and tourism respectively. We’ll take it as a given that every thinking person can recognise these comments as the unfiltered bilge that they are.

Of far more concern are the growing hordes of MPs, commentators and members of the public calling for Donald Trump to be banned from ever entering the UK on the grounds of “hate speech”.

The inevitable online petition is already circulating and picking up names, reports the Huffington Post:

An online petition calls on U.K. Home Secretary Theresa May to bar the Republican presidential frontrunner from entering the country for allegedly violating the nation’s hate-speech laws.

If it receives 100,000 signatures, the petition could be taken up for debate in the House of Commons, according to The Independent.

The petition launched by Scottish resident and longtime Trump critic Suzanne Kelly blasts Trump for “unrepentant hate speech and unacceptable behavior” that “foments racial, religious and nationalistic intolerance which should not be welcome in the U.K.”

While Sunder Katwala sets out the illiberal case over at British Future:

It is important that the UK Government makes very clear that this extreme view is rejected and repudiated in the strongest possible terms.

The UK Home Office has set out clear guidelines which have led to the exclusion of preachers of hate from the UK if their presence here would not be conducive to the public good. Theresa May has excluded extreme Islamists on these grounds, and also kept out those who have fanned extreme anti-Muslim prejudice, such as the bloggers Pamela Geller and Robert Spencer. Trump’s statements are more extreme than theirs.

Unless and until Trump were to retract these highly prejudiced comments, there is a good case for making clear that he would be refused entry to the UK by the Home Secretary.

No. It is only “important” that the UK government does anything at all about this wretched circus act if you take the view that it is the proper role of government to be a watchful, overprotective parent who oversees everything that we do, say or hear, supposedly for our own good.

It’s only “important” if you take such a dim view of the intelligence of the British people that you believe – like a Victorian prude – that the health and morals of the nation are somehow at stake, and that general public might be inspired to commit racist or Islamophobic deeds either at the mere sound of Trump’s words or at the sight of his ridiculous hairdo.

Such a view is as nonsensical as it is insulting. Why on earth should the UK government care what a reality TV star turned presidential candidate says, and why can’t the British people be trusted to hear what he has to say and judge the merits (or the idiocy) for themselves? Besides, either Trump’s candidacy remains a complete joke, in which case illiberal UK government censorship would be a massive overreaction, or he is a viable contender – in which case the UK needs to remain neutral while our closest ally chooses their next leader.

Donald Trump didn’t cover himself in any glory with his latest comments on Islam and London. But who expected anything more of him? For all his natural gift as a TV personality, Trump is a blowhard, anti-intellectual populist of the worst sort – a man who is fundamentally incurious but convinced that he has the right answer for everything (usually involving “winning” a trade war with China).

And to be sure, Trump’s latest remarks disqualify him as a serious candidate for the presidency, if the ten previous outrage-baiting comments had not already done so. In many ways, this is Trump’s “choosing Sarah Palin” moment – the action which finally doomed his candidacy, much like John McCain’s desperate and opportunistic pick for a vice presidential candidate back in 2008.

But the Left supposedly hold themselves to a higher standard. And yet in response to Trump’s inflammatory words we have seen such a parade of ostentatious outrage and cheap virtue-signalling that one could almost be forgiven for forgetting that the Left are in no small part responsible for the rise of Trump in the first place, as Douglas Murray devastatingly explains in The Spectator:

When the political left refuses to identify where Islamic terrorism comes from, what drives it or what it can even be called, it leaves the ground wholly open for anyone else to do or say anything they want.  Far from being blunt tools or broad brushstrokes, referring to ‘Islamic extremism’ or ‘Islamism’ makes an obvious and conscious effort to put down a delineating line between non-extreme Muslims and the extremists from their faith.  Yet many Muslim organisations, among others, reject this.

[..] But what people seem slow to realise is that suppressing legitimate concerns and decent discussion inevitably leads to people addressing the same things indecently.  We can thank the American left for the creation of Donald Trump and we can thank them for his comments last night.  For years the left made the cost of entering this discussion too high, so too few people were left willing to discuss the finer points of immigration, asylum or counter-terrorism policy and eventually the only release valve for peoples’ legitimate concerns is someone saying – wrongly in my view – ‘keep them all out.’

Yes, of course Donald Trump’s comments are reprehensible. But the answer is not to parade our outrage on social media, as though engaging in a competition to be more publicly offended by Trump’s words is a meaningful substitute for real activism. And nor is the answer to ban Donald Trump from coming to these shores, thus denying Boris Johnson and thousands of eager Londoners the opportunity to prove him wrong about our city – and Trump himself from receiving this much needed education.

Outrage on Twitter is nothing more than empty virtue-signalling, whilst indignant calls for Trump to be banned from entering the UK are every bit as illiberal as Trump’s own proposal to set a religious test for entry into the United States.

Donald Trump’s opponents believe that they are better than the business mogul, reality TV star and presidential candidate. If so – if they are all simply better, more enlightened people, a belief they make little effort to hide – they have a funny way of showing it. 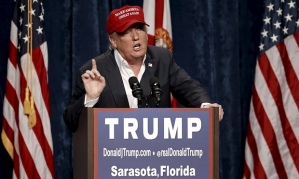