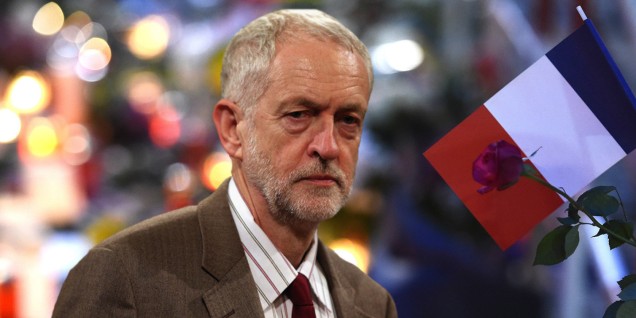 Jeremy Corbyn refused to say that he would order the police to kill active terrorist gunmen if the Paris attacks were to be repeated in London. Anyone unable to see this stark issue in clear moral terms is unfit to lead the Labour Party, let alone their country

While giving an interview to the BBC about the terrorist attacks in Paris, the Labour leader was asked:

“If you were prime minister, would you be happy to order people – police or military – to shoot to kill on Britain’s streets?”

To be clear: this wasn’t about armed robbers, car thieves or crazy people with knives – it was specifically about a future terrorist attack like the bloodbath in Paris on 13 November.

And the Leader of the Opposition – our alternative prime minister in waiting – responded:

“I’m not happy with a shoot to kill policy in general. I think that is quite dangerous, and I think can often be counterproductive. I think you have to have security that prevents people from firing off weapons where you can. There are various degrees of doing things as we know, but the idea you end up with a war on the streets is not a good thing. Surely you have to work to try and prevent these things happening, that’s got to be the priority”.

So that’s a no, then. If armed terrorists killed innocent Londoners having dinner at a restaurant before going on to commit a massacre at a West End theatre, authorising the use of lethal force to subdue the terrorist attack and save the victims would be “counterproductive”.

If a politician equivocates or dodges a simple question, it is usually because they know that giving an honest answer or revealing their true thoughts on a subject will offend or alienate a critical voter bloc, special interest group or audience.

When David Cameron refuses to explicitly say that he might campaign for Brexit if he does not get the concessions he wants from his EU renegotiation, it is because he wants to appear tough to eurosceptics while desperately trying to avoid scaring pro-European Tories and his EU partners.

And when Chuka Umunna says that he supports the junior doctors but opposes their planned strike action, he is willing to endure looking ridiculous on national television is because he is determined to suck up both to NHS workers who want to strike and to his constituents, who do not want to see their health service disrupted. It’s Boris Johnson’s policy on cake all over again.

So what group of people could Jeremy Corbyn possibly be so desperate to avoid offending that he point-blank refused to say that the British police should shoot to kill any hypothetical terrorist gunmen on the rampage in London?

Exactly who is Corbyn trying to appease or placate by twisting himself in such rhetorical knots and avoiding giving the answer that 95% of the British public want and expect to hear? There can only be one answer. And it is a sickening one.

Jeremy Corbyn can’t publicly say that he would definitely order British police to kill armed terrorist gunmen in the middle of carrying out an attack because the people he is desperate to avoid offending – the constituency he is trying to court but cannot do so out in the open – are either those who might themselves one day decide to go on the rampage with a Kalashnikov on Oxford Street, or those who would cheer them on from the couch. Just like his Shadow Chancellor John McDonnell could never find a bad word to say about the IRA, because they were secretly his constituency.

I’ve spent most of the afternoon and evening since that interview in a state of incredulity, trying to think of another possible reason for Corbyn’s long-winded evasion, and I have come up short. There is no other explanation. Jeremy Corbyn’s core constituency – the ones who must never be questioned, insulted or offended – are the people who watched Death shroud the City of Light last weekend while cheering with glee.

I was wrong. I supported Jeremy Corbyn in the Labour leadership contest after a navel-gazing general election campaign focused almost exclusively on domestic policy and lacking any compelling vision for Britain’s future. In that context, it seemed that having a major party leader planted firmly outside the stale, centrist political consensus could only be a good thing.

I hoped that a left wing true-believer at the head of the Labour Party might force David Cameron’s Coke Zero Conservative government to rediscover its ideological backbone and make a real dent in the bloated British state. It was a noble dream, even though I caveated my endorsement of Corbyn at the time by pointing out that Corbyn’s foreign and defence policies were utterly wrong:

For all that Jeremy Corbyn has done to breathe life into a stale political scene, his foreign policy positions are indefensible and often dangerous. Where there should be simplicity – like abhorring the murder of British soldiers by terrorists – Corbyn sees great moral complexity. And where there is genuine complexity – like tackling extremism and radicalisation in modern Britain – Corbyn sees simple solutions which demand nothing of those most likely to forsake their British freedoms and take up arms against us.

But Corbyn’s foreign and security policies are not just wrong – they are downright dangerous. Never mind the sixth-form naivety behind his desire for unilateral (and unreciprocated) British nuclear disarmament. Never mind his desire to run down the Armed Forces to a degree that would make David Cameron look like a neoconservative defence hawk. Jeremy Corbyn cannot even look the British people in the eye and tell them that he would authorise the use of deadly force to save them from an ongoing terrorist attack. Because he would much rather negotiate with the gunmen instead.

There’s nothing to say in defence of that sentiment, of that ludicrous, naive stance. It blows any and all arguments in favour of Jeremy Corbyn’s leadership – and there are some, despite what those who have been against him from day one may say – clean out of the water. It embarrasses and shames those of us who supported Corbyn hoping that an unapologetically left wing voice at the top level of British politics might reinvigorate the domestic debate. And it should make us all very, very angry.

This blog strongly disagrees with Dan Hodges’ call for more government surveillance in the wake of the Paris attacks, but he is dead right in his assessment of the political reality now faced by the Labour Party.

Neither [Jeremy Corbyn or John McDonnell] actively supports terrorism. But their world view, their instincts and their need to appease a constituency that views Isil and “Western imperialism” as different sides of the same coin means that were they ever called on to confront the terrorists practically, they would falter. Reduced surveillance. Reduced global anti-terror cooperation. No airstrikes against Isil in Syria or Iraq. No drone strikes anywhere. Direct Stop The War input into UK security policy.

We have heard a lot from Labour MPs about the difficulties of finding a way of removing Jeremy Corbyn. Tough. They will have to find a way.

Because if they don’t, then it’s not just Corbyn and the terror appeasers who will pay the price. Every member of the shadow cabinet, every Labour MP and every Labour activist will find themselves tainted by the Tory charge that Labour cannot be trusted to keep this country safe. And they will be tainted with it because it will be true.

Nearly every politician can count some unsavoury groups or individuals among their supporters and core constituents, be it Big Tobacco, Big Pharma, media conglomerates, the firearms industy (in America) or others. And to some degree that’s the cost of doing business in our jaded political world – it shouldn’t happen, but it is very difficult to stamp out without draconian campaign finance reform.

It’s bad enough for a politician to legislate in favour of a certain industry when they receive campaign contributions from that group, essentially allowing our democracy to be bought and sold to the highest bidder. But it is even more of an outrage for a senior politician to advocate extreme pacifist policies toward aggressors when that politician already has a reputation for channelling the narrative of the group that most stands to benefit from a weak Britain.

The only public figure who might reasonably suggest – if taken literally – that we should turn the other cheek as we are being mown down in a hail of automatic weapons fire is that other, more famous pacifist and JC – Jesus Christ. But while Jeremy Corbyn’s election as leader of the Labour Party was many things, the second coming it certainly was not.

The Lord is allowed take an absolutist position on violence, and we should be inspired by His words as far as we can practically follow them. But Jeremy Corbyn – and British politicians in general – operate not in the spiritual realm, but rather the temporal world. They have a duty to preserve our country and protect our citizens – those of all faiths and none – above everything else.

Jeremy Corbyn is not a rabble-rousing backbencher any more. He is the Leader of the Opposition, and one of the most high profile politicians in the country. And therefore when he says that he is “not happy” with a shoot first policy when it comes to terrorist gunmen, we must take him at his word.

And then, once our shock has abated, we should immediately stop taking seriously anything else that Corbyn and his party have to say on foreign and security policy. 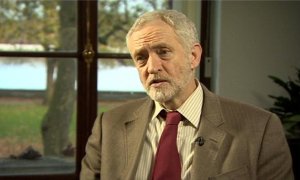