If the Labour Party choose former Shadow Business Secretary Chuka Umunna to be their new leader, they will make perfectly clear that they have no intention of learning the lessons from their defeat, and they will fully deserve another electoral humiliation in 2020.

It really is that simple. Chuka Umunna is not necessarily a bad person – in many ways he was one of the few truly competent performers and articulate voices in Ed Miliband’s team of losers – but the mere act of his installation as the successor to Attlee, Wilson, Callaghan and Kinnock would be enough to permanently alienate many of the voters who spurned Labour this May.

This blog has watched for years as the Labour Party gave up any pretence of offering Britain a real, coherent ideological alternative, and instead became a moralising, virtue-signalling talking shop, run by and on behalf of their London-based, upper middle class clerisy.

They may still regurgitate the language of standing up for the working man, the poor and the vulnerable – when they are in public. But behind closed doors their love of the EU, heavy handed regulation, bloated public services and open door immigration with no effort to up-skill the domestic workforce to compete made quite clear that Ed Miliband’s Labour Party was very much in it for selfish reasons.

I also wanted, frankly, to get out of London and say what I was going to do here, because of course we’ve got to be winning in a place like Swindon so I’m pleased today to be announcing that I will be standing for the leadership of the party. I think we can and we should be winning in seats like in Swindon – north, south, east, west, we can absolutely do it as a party.

Just what the Labour Party needs. Another dazed and confused London career politician stumbling shell-shocked and bewildered beyond the M25 in a belated effort to understand why so many working and middle class people – Britain’s strivers – spurned his party at the general election, totally unconvinced by a Labour manifesto and message conceived in Islington but barely embraced even in Hampstead.

At a time when David Cameron is building an inclusive Tory cabinet which conspicuously harnesses the talents of women and MPs from working class backgrounds, for Labour to respond by crowning a well-moneyed, metropolitan, UKIP-hating elitist such as Umunna would only serve to confirm everyone’s worst suspicions about the party.

And those suspicions are that the modern, virtue-signalling, style-over-substance Labour Party would rather dwindle to an angry, self-righteous, ideologically pure talking shop for the London dinner party set than do the hard work of rebuilding in order to actually help the people it claims to represent; that it lacks the wisdom to recall its ideological roots or the humility to reach out to its scorned party base.

But the Labour Party should not need to be told any of this. They should know that Chuka Umunna would be a terrible choice. This much, if nothing else, should be self-evident – clearly understood as the wrong way to go.

Of course Umunna has been making all the right noises about Labour’s defeat, ever since that stunning exit poll at 10PM on Thursday night. But peel back the platitudes about needing to learn lessons and understand what the electorate is saying, and you are left with a whole heap of denial. Labour’s message was essentially pro-working people and pro-business, goes this stubborn belief – it was just portrayed as being otherwise by nefarious external sources.

This is dangerous self-delusion, and comes perilously close to blaming the voters for not realising what a good choice they had right in front of them. But the truth is that voters were reasonably certain about what the Conservative Party offered, but were left confused by a Labour message which droned on about the inhumanity of public spending restraint while simultaneously promising to be the party of fiscal discipline.

As this blog pointed out last year:

If a politician is “not clear what they stand for”, then they aren’t “good”. They may be a gifted orator, a coalition-builder, a shrewd political operator or have any number of other talents. But in Britain’s current centrist malaise, another on-message, telegenic candidate who smoothly adapts to suit the focus groups and then conveniently goes off-message to avoid association with his imploding party leadership isn’t the answer that the Labour Party – or the country – needs.

As Mr. Umunna fights his leadership campaign, we will soon discover whether the Labour Party is actually interested in governing again one day, or if it prefers a life spent in morally outraged opposition. 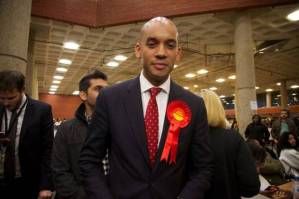 7 thoughts on “Labour Party Leadership Contest: Anyone But Chuka”