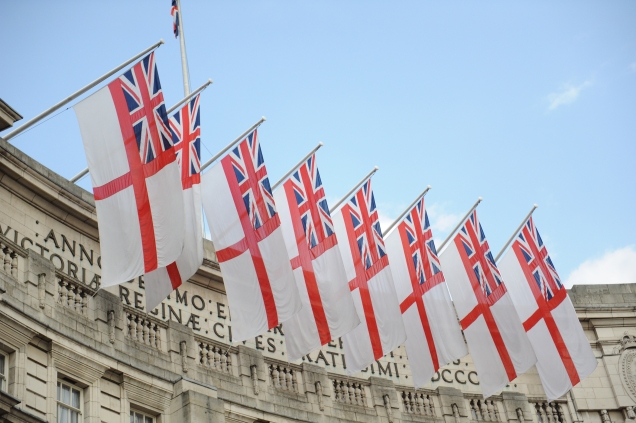 What did you do today to celebrate St. George’s Day?

If you’re like most people, quite understandably, you probably did nothing at all – after juggling work and the stress of daily life, there simply isn’t much time left in the day to celebrate the overlooked and unexciting Feast of St. George.

But of those people who did mark the day, a small but vocal minority were determined to use St. George’s Day not as a day to celebrate Englishness, England and her patron saint, but rather as an opportunity to mock and belittle those people who do try to celebrate our national heritage, and those who are proud (and brave enough) to be openly patriotic in modern Britain.

UKIP, virtually the only British political party that doesn’t view patriotism as something embarrassing or gauche (sometimes, on a good day, some Tories can still make a decent effort), called for all Britons to mark St. George’s Day by wearing a red rose, and lobbied for the day to be made into a public holiday.

From the Daily Express:

Ukip deputy leader Paul Nuttall said the gesture was needed as a way of registering protest against attempts by local councils and quangos to ignore or obliterate English identity.

“It saddens and angers me that this day marking Englishness is so low key compared to how days for the other three countries of the union are publicly celebrated,” Mr Nuttall said.

“The situation has improved over recent years but it passes by unrecognised by many English people. I have long argued that it should be a declared a Bank Holiday and I have not lost my passion for that idea.”

Ukip yesterday released a dossier of examples of public authorities attempting to ban or denigrate the England flag in recent years. They included supermarket staff and taxi drivers being ordered not to display England flags and pennants on their vehicles.

The response from the establishment was predictably scornful, sometimes verging on outright hostility.

First came a sneering article in the Telegraph, facetiously pondering whether or not St. George would even have been allowed to settle in Britain under UKIP’s supposedly draconian immigration rules (so draconian that plenty of other western liberal democracies like the United States and Australia use similar schemes).

While the Telegraph’s Rupert Myers was right to criticise the left’s “cringing avoidance of our national identity“, to include UKIP among the “far right” groups who have hijacked England’s flag was supremely ignorant at best, and certainly insulting to millions of decent, patriotic people who were ignored and derided by the other political parties for too long, before eventually finding a home in Nigel Farage’s party:

Yet the Englishman’s curse is to be forever trapped between two overreactions to our national identity. On the Left there is a collective Thornberryish cringe, the dismal shame with which some English men and women shrug off the mantle of national identity, history and myth. These are people who would lap up the quaint religious and cultural practices encountered while on their summer holidays, but who recoil awkwardly at their own. They abandon the saint and the flag to a species found beyond the reaches of the London Underground, with whom they have little to no affinity.

Just as awful as Labour’s cringing avoidance of our national identity, however, is its hungry embrace by some on the far Right. Today Nigel Farage has combined cynical nationalism with an attention-seeking scrabble for relevance by calling for St George’s Day to become a national holiday. It is a desperate prod at the open wound of our constitutional settlement – less a tribute to England than an antagonistic poke at Wales, Northern Ireland, and, most significantly, Scotland.

On the left’s instinctive recoil when confronted with any opportunity to show pride in Britain, or England, Myers is absolutely correct. While this blog believes that Labour MP Emily Thornberry’s sacking for the mere act of tweeting a picture was unduly harsh, its happening at all is evidence that even Labour high command realise that their party comes across as scornful and derisive toward those who are simply proud to call these islands home.

But by linking UKIP’s campaign to make St George’s Day a national holiday to the “hungry embrace” of English patriotic symbols by “some on the far Right”, Myers goes too far. You can disagree with UKIP all you want on matters of policy – though it should be pointed out that even at this late stage in the 2015 general election cycle, Nigel Farage’s party is the only one whose tax and spending manifesto pledges have been reviewed by an outside authority and declared sane – but to equate robust and good-hearted patriotism with the dark, ugly nationalism of Britain First or the BNP is wrong, and de-legitimises the perfectly mainstream views of a good segment of the population.

Meanwhile, The Spectator pondered whether UKIP was trying to establish itself as a sectarian party of the south, though Sebastian Payne’s suggestion was rather undermined by the fact that UKIP also want to make St. David’s Day national holidays:

The party’s cultural spokesman Peter Whittle said they wanted to tackle the ‘cultural self-loathing’ Ukip believes has developed over Englishness. It was pointed out to Whittle that St George was an immigrant himself — from Turkey — but Ukip apparently wouldn’t have a problem with him entering Britain because he would be a ‘skilled migrant’, being able to slay dragons and all.

It’s telling that many London-based journalists are able to laugh about UKIP distinguishing between skilled and unskilled migration. As respected and talented professionals, their skills are non-transferable and non-outsourceable, and it is very difficult for anyone to displace or undercut them in the job market – other than the ambitious children of rich, upper-middle class parents who can subsidise their unpaid internships and freelancing experience as they establish their own toehold in a difficult industry.

Many other Britons are not so lucky. Some are not academic, some were victims of redundancy during the decline of heavy industry in the 1980s and never retrained, but most were simply failed by Britain’s mediocre (excluding the top) education system. So while Sebastian Payne and many of his readers can laugh about St. George being a “skilled migrant”, it is an altogether less amusing topic for the millions of unskilled and low-paid British workers whose pay and prospects have stagnated or declined in part because of unlimited immigration from the poorer countries of the European Union.

Naturally, the Guardian sneered at UKIP’s St. George’s Day press conference, with columnist Marina Hyde furiously ignoring the fact that UKIP’s is the only independently costed manifesto to focus on the cost of observing another public holiday:

Asked whether its manifesto pledge to make St George’s Day a bank holiday would lose UK Plc money, O’Flynn answered in the negative, deploying the old swings-and-roundabouts principle. He said: “Flag makers will get a boost to productivity.”

Good news for the workers of Guangdong province, certainly. I’m kidding – this is all copper-bottomed, gold-plated economics. The party’s vision of our past-effect future is all exactly as detailed in Adam Smith’s lesser known work, the Wealth of Nationalism, which looks forward to the day when the trade in polyester flags and Ukip tie pins will be the primary driver of economic growth.

The BBC, striving to remain above the fray, simply reported that “St. George’s Day Gets Political Online“, though many of the messages on social media wore the fashionable detached amusement which often now greets any talk of patriotism or British values:

As it happens, rather than elevating St. George’s Day (and using the mythical accomplishments of an early Christian martyr as a proxy for national pride) this blog would prefer the establishment of an entirely new UK-wide national holiday, one that people from all four home nations can rally around as a celebration of who we are and what we have accomplished together as a United Kingdom.

In fact, last summer I found myself arguing this very point last year when I was invited to participate in a London Live television debate on the question of whether the religious festivals of Eid and Diwali should be made UK public holidays as a nod to Muslim, Hindu and Sikh Britons:

As I pointed out in this debate, with last year’s Scottish independence referendum, the resurgence of the Scottish and Welsh nationalist parties and the public scorning of St. George’s Day while thoughts of making even minority religious festivals into public holidays are seriously discussed, Britain is starting to fracture into a disjointed and unharmonious collection of competing special interest groups and subcultures which do not recognise any of the bonds or values which have traditionally held us together as a country.

This is dangerous. It’s great that the United Kingdom is a welcoming, reasonably meritocratic place where people from anywhere in the world can come and settle and flourish, and where we can all enjoy and learn from one another’s cultures and traditions in relative peace. That’s quite a rare thing – very few countries can seriously claim that they are both as attractive to immigrants and as welcoming of them when they arrive as we are in Britain. We may not quite have the American melting pot on this side of the Atlantic, but we do pretty well.

But if we continue to allow high levels of net immigration and the very multicultural society that results from it, it is hugely important that we also take time to celebrate and nurture the things that make us all British, no matter our ethnicity, the colour of our skin, whether we are first generation immigrants or if we can trace our family’s history in Britain back hundreds of years. For as long as the world is organised around the basic building block of the nation state, we all have a duty to keep our own country strong, prosperous and at ease with itself.

Symbols are an important part of that effort, whether it is allegiance to our flag or the observance of public holidays which mean something more than just a day off work and a long weekend in the country. UKIP’s proposal to make St. George’s Day a bank holiday may be imperfect – it focuses too much on addressing the imbalance between the English and Scottish saints days, while failing to unite us all around our common Britishness – but it deserves serious discussion and due respect, not the sniggering scorn shown by some people who either consider it beneath them to be patriotic, or who are simply unable to distinguish between healthy patriotism and jingoistic nationalism.

This Thursday, the twenty-third day of April, was a great day for some on the British political left to have a good laugh and flaunt their progressive credentials by mocking UKIP supporters and other British patriots. Perhaps next St. George’s Day will be one which more of us take time to be quietly grateful to the great country which gives us life and liberty.

10 thoughts on “For The Left, St. George’s Day Was A Great Chance To Mock UKIP Supporters”