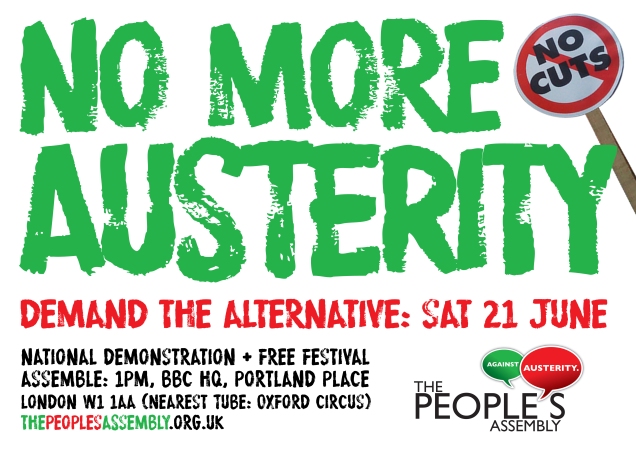 Semi-Partisan Sam will be covering the national demonstration held by The People’s Assembly in London today, entitled “No More Austerity: Demand The Alternative”.

The timing of the protest is somewhat strange, given the fact that we are less than one year away from the 2015 general election and the end of the current coalition government responsible for the “cuts”. Most of the “austerity” policies have already taken full effect and could not be immediately reversed even if David Cameron (and Ed Miliband, who has pledged to stick to the current government’s spending plans should Labour win in 2015) were to witness the crowds at Trafalgar Square and have a sudden change of heart.

In that sense, just like the Judean People’s Front in Monty Python’s Life of Brian, the demonstrators gathering outside BBC Broadcasting House tomorrow afternoon will be engaged in a struggle with reality rather than against a policy that they have any hope of altering in the near future.

One glance at the list of supporters and attendees reveals that the protesters hail from a variety of backgrounds and have a range of different interests at stake, though they are united in their opposition to any government cuts of any kind and for any reason. The People’s Assembly founding statement declares they “support every genuine movement and action taken against any and all of the cuts”.

The lack of nuance in this statement is interesting – centrists and those on the right may be curious to delve inside the minds of people who sincerely believe that the state should only ever grow larger and do more for people, and that any interruption of this trajectory automatically equates to wanton cruelty on the part of callous people with no hearts.

Semi-Partisan Sam hopes to have just this opportunity, and to report back not just on what is drawing people out onto the streets in protest, but also on what their ideal alternative version of Britain looks like.

It’s a question worth asking, because despite Ed Miliband’s manifold weaknesses as leader of the Labour Party, there is a real chance that he could enter Number 10 Downing Street as prime minister in 2015 – and he is entirely sympathetic to the People’s Assembly aims, dovetailing as they do so nicely with his own “new politics” of brutal tax hikes and renationalisation.

Hopefully the answer – and the mysterious “alternative to austerity” being demanded – will be revealed at The People’s Assembly Struggle against Austerity Reality in London later today. Celebrity guest Russell Brand certainly thinks so:

“The People’s Assembly will bring down any government that doesn’t end austerity. Austerity means keeping all the money among people who have loads of it. This is the biggest problem we face today, all other problems radiate from this toxic swindle. We can organise a fairer, more just society than they can, these demonstrations are the start, it will be a right laugh.”

So there you have it. There’s a fixed amount of money in the world, and all that’s needed is to have a “right laugh” together, toss around a few ideas, redistribute the cash a bit and everything will be just fine. It will be like the evil Tories never existed.

Stay tuned to @SamHooper on Twitter for live-tweets from 1PM onwards (London time), and to this blog for discussion and analysis of the demonstration after the fact.