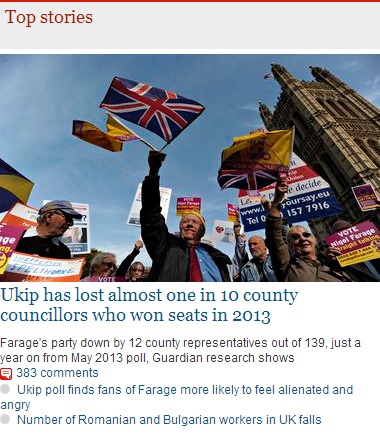 This is a screenshot of the Guardian’s top political stories taken from their website at 00.54 on Thursday 15 May, one week before election day.

All three leaders are attacks on UKIP in one guise or another. The first article points out that UKIP has experienced an unusually high degree of defections and resignations from the ranks of its 2013 intake of local councillors. The second basically suggests that UKIP supporters are paranoid and ignorant hillbillies to the last man, while the third deconstructs UKIP’s talking points on immigration from Romania and Bulgaria.

The concern is not that the Guardian’s stories necessarily lack truth or validity. But it is glaringly apparent from the choice and placement of the stories on the homepage – to the total exclusion of any other coverage – that there is a concerted effort underway at the newspaper to chip away at UKIP’s credibility and support. Given the dearth of articles analysing Conservative, Labour or Liberal Democrat policies it is clear that the newsroom’s finite resources are being used disproportionately to undermine the insurgent party, whilst allowing the established parties (even the hated Tories) almost completely off the hook.

Note also what is entirely absent from The Guardian’s political coverage of the local and European elections, not just tonight but over the course of the campaign as a whole:

No coverage of the latest polling numbers and UKIP’s strength vis-a-vis the established political parties.

No probing or questioning of the Labour and Liberal Democrat stance, which is to refuse the British people a referendum on continued membership of the European Union, despite the widespread public support for such an in/out debate.

No discussion of the ‘state of the union’, i.e. the budget, the misuse of EU funds, the incidences of corruption and the increasingly pervasive influence of corporate lobbyists in Brussels.

No discussion of proposed EU-wide financial transactions taxes, their pros and cons and their likely impact on the City of London and the overall UK economy.

No discussion for the parallel campaign for the presidency of the powerful European Commission.

A visitor to the Guardian’s website might reasonably conclude that the main three national political parties in Britain have inexplicably gone into hibernation, and that UKIP have been given the run of the house. But while it is certainly the case that UKIP have consistently provided the most attention-grabbing stories (thanks in large part to policies with grassroots appeal and a leader who doesn’t have to practice looking genuine in front of the mirror every morning), it is unforgivable for a national newspaper to so thoroughly abdicate its responsibility to cover the also-rans.

The Guardian prides itself on having a readership that is a cut above the rest in terms of book smarts, education and general worldliness. But even accounting for their audience’s generally left leaning stance – let’s not deny anyone their political biases and preferences – you would think that among these luminaries there might be some basic level of curiosity about what the other parties (you know, the ones who actually have MPs and win elections) are up to this election season.

Not that this lack of curiosity provides an excuse – even in its apparent total absence, a political editor might think to include an article or two on the policies and strategic positioning of the other parties, just as a byproduct of doing their job properly. And yet the Guardian (and many others) are content to follow the heard and serve up a constant stream of anti-UKIP sentiment to the exclusion of everything else.

For anyone still wondering, this right here is the reason why UKIP remain in contention this election season, despite the unremitting volley of negative press coverage (yes, some of it self-inflicted) and attacks from all sides of the political spectrum:

The Guardian – not to mention the leaders of the three main political parties – seem to have forgotten two rather endearing truths about the British people for whom they claim to work and speak. Firstly, the British cannot abide a bully, and anyone with even a modicum of sympathy for any of UKIP’s positions is likely to feel that the party has been unfairly singled out for criticism.

But secondly and most importantly, we British love an underdog. You can sense Nigel Farage’s frustration and impatience every time one of his improperly-vetted candidates or publicity-seeking spokespeople says something outrageous or defects in a blaze of negative publicity. One gets the impression that UKIP’s leader is fighting a solitary David and Goliath-style battle against the establishment and against the odds, very much alone. And as the immature party apparatus creaks and groans around him as it tries to fight a national campaign, one catches oneself rooting for the man. Or at least, 31% of the voters do.

When the European elections have taken place and the dust settles, much will be written and wondered aloud about how UKIP performed as well as they did given the unified forces ranged against them. Responsibility will be parcelled out, to the great recession for making people dissatisfied, to the expenses scandal for making people distrustful of mainstream politicians, to the people themselves for being credulous fools with borderline racist tendencies.

In short, the blame will be placed everywhere but the one place that it most belongs – at the feet of the smug, left-liberal bloc and their terrified counterparts on the right, who are witnessing a groundswell of legitimate dissatisfaction and demand for change from the British people, but see only a pesky political mosquito to be swatted out of existence.

One thought on “Gunning For UKIP”