As the countdown to the opening ceremony for the 2014 Winter Olympics in Sochi nears its conclusion, Google marks the commencement of the Games: 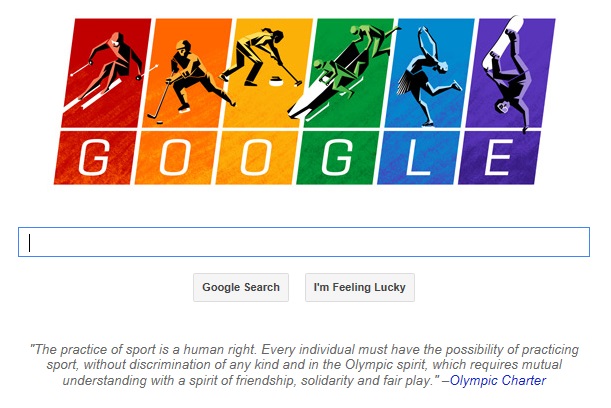 A timely reminder of the Olympic values, at a time when the host country conspicuously fails to practice them when it comes to respecting and upholding the rights of its own citizens.

I was never in favour of the Olympics being awarded to Russia, especially at a time when that country’s tentative moves toward real democracy were being so rapidly undone and an authoritarian one-party government consolidated its power. Indeed, today’s Russia exhibits almost all of the characteristics that you would not want to see in a country hosting a major international event – corruption on a massive scale, dangerous levels of internal unrest, displacement of local people, oppression of minorities, lack of a free press, suppression of political dissent and the strangulation of democracy in every way.

But in mitigation, it should be remembered that in some very pertinent aspects, we are not so much more “advanced” or enlightened than the Russian state. Andrew Sullivan makes the excellent point that many people from the United Kingdom and United States who are so aghast at Russia’s controversial laws prohibiting “homosexual propaganda” overlook the fact that until quite recently, things were not so different back home:

At the same time, it seems to me we need to be careful not to misread the specific cultural context here. There’s a worrying tendency for some gay activists to assume that because a foreign country is not identical to the US on the question of gay rights, it’s an outrage that must be immediately confronted and changed. But America, only a decade ago, was not identical to the US today. Many states still have in their very constitutions the relegation of gay people to second class status. The last president of the US, George W Bush, wanted to enshrine the inferiority of gay couples in the federal constitution. It’s been only a few years since gays were able to serve openly in the US military. To turn around and then be shocked and appalled that homophobia is still very much alive and well in the Russian rural heartland is more than a little obtuse.

A fair point well made. Indeed, there are a number of British and American pundits and politicians, strident in their opposition to equal rights for gay people, who openly admire and praise the actions of the Russian government. And so I should reiterate that my antipathy is toward the authoritarian, corrupt President Putin and the culture that he has helped to create, and not toward the Russian people themselves.

I will watch the Sochi Olympics with interest, as I always do, and I hope that they are a wonderful sporting success, free from any of the feared violence or disruption. But you must excuse me for not joining in the celebration of the despot Vladimir Putin’s moment of triumph – the man does not deserve a victory lap on the world stage.